She's Listening began in Ottawa in 2012 as a concert series and album in support Ovarian Cancer Canada by Mike Anderson of ArtsPublicity.

All proceeds from the sale of this album will go to Ovarian Cancer Canada to support much needed research into prevention, improved treatments, and ultimately a cure.

Listen to a sample of songs below. For information on the artists, visit https://sheslisteningmusic.ca/she-s-listening-cd.

Thank you in advance for your support! 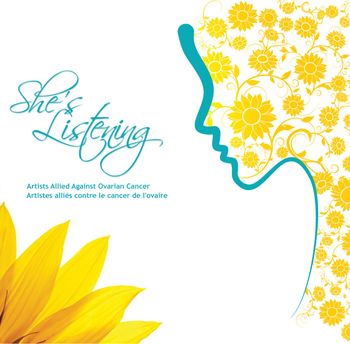 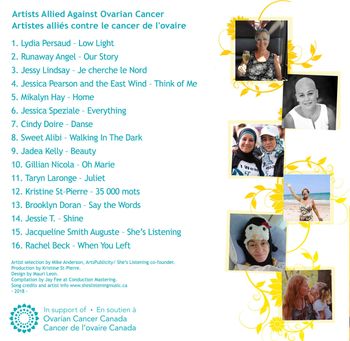 *Ovarian cancer is the ninth most commonly diagnosed cancer among Canadian women, is the fifth most common cause of death from cancer among women, and has the highest mortality rate of all cancers of the female reproductive system. (StatsCan, 2015)

*Federal funding for research between 2005 and 2015 reached $249.3 million for breast cancer and $102.7 million for prostate cancer, while ovarian cancer research received $38.6 million.

*Survival rates for ovarian cancer in 2017 were 44 per cent compared to 87 per cent for breast cancer and 95 per cent for prostate cancer.